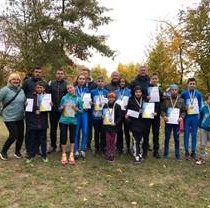 Members of Ski and Biathlon Club Feldman Ecopark took part in National Summer Biathlon Competitions. Competitions took place last Sunday in Kyiv. They competed as members of Kharkiv national team with peers from other regions and showed good results – the 2nd place among older boys and the 3rd place among younger girls.

Competitions took place in the format of a running sprint with air-gun shooting. Strong teams from six regions of Ukraine participated in them. Sportsmen of our Club (8 of 18 in the Kharkiv national team) performed on such top-level competitions for the first time. We are satisfied with the results, – the head of Feldman Ecopark Ski and Biathlon Club Svitlana Ilyinskikh reported. – Races were held among boys and girls in two age groups: 2006-2007 and 2008-2009 year of birth. In the first group, Oleksii Shyp won the silver medal. In the second group,Tatiana Tesla took bronze. Both young athletes are our pupils and we are sure that they have many more victories in big sports ahead on the way that they started in Feldman Ecopark.

It should be reminded that the Feldman Ecopark Ski and Biathlon Club was opened in 2016. Members of the Club repeatedly became prizewinners and winners of Kharkiv, regional and national superiorities. About 50 children aged from 7 up to 14 years train in the Club free of charge all year round. It is one of the most popular sports direction within the 1,000 Teams Tournament project. The Club’s activity includes an inclusive programme for children with special needs. Lessons take place 3 times a week in the territory of the Social and Humanitarian Multi-Complex Feldman Ecopark. It’s possible to register by phone: 063-432-44-36.