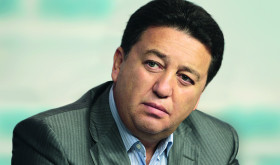 Oleksandr Feldman was born on January 6, 1960 in Kharkov. He is married and has two sons. He graduated from the Kharkov National University with the degree in Economics. He served in the Soviet Army.

His career evolved from a driver and boiler plant operator to Honorable President of Concern AVEC & Co., one of Ukraine’s largest private enterprises. One of the projects of Concern is Barabashovo Trade Center, the biggest commercial centre in Eastern Europe at the moment. The center now is a workplace for over 60 thousand people. The area of the commercial center is about 70 hectares. Every day about 250 000 customers visit Barabashovo.

In 1997 A. Feldman initiated and established Kharkiv City Charitable Foundation AVEC that in 2007 was reorganized to Oleksandr Feldman’s International Charitable Fund. The Fund is one of the largest charitable organizations in Ukraine; in 2007 it was ranked among the top 5 largest charitable foundations of the country. By results of 2008 and 2009 the Fund took third place in the national ranking of the largest benefactors according to the newspaper ‘Delo’. In 2010 Charitable Fund Olexandr Feldman’s Fund took the first place in the ‘Assistance to the Vulnerable’ and the second in the rating of the most important projects in the field of preservation of cultural heritage in the national annual rating of benefactors of the newspaper ‘Delo’. As of a year-end 2011, the Fund has entered a trio of the largest charity funds in Ukraine.

The Fund’s priorities are maternity and childcare, assistance to families with many children and orphans, protection of human rights; assistance to socially vulnerable categories of the population, support for culture, science, education and sports.

Oleksandr Feldman is widely known in Ukraine and abroad as an active politician, philanthropist and social activist, as well as the political leader of the Jewish community of Ukraine.

Oleksandr Feldman represents Ukraine in the ‘World Inter-Parliamentary Coalition for Combating Anti-Semitism’, founded in 2009 under the patronage of the Prime Minister of the Great Britain. More than 130 MPs representing the United States, Canada, Britain, and the European Parliament are included in the Coalition.

Oleksandr Feldman is also one of the founders and representatives of Ukraine in the Coexistence trust established in 2005 upon an initiative of Prince Hassan Bin Talal of Jordan and Lord Janner (the United Kingdom). At the moment, 120 influential political figures from 54 countries are members of this organization.

O. Feldman is an author of more than 100 bills of human rights and socioeconomic orientation.
Oleksandr Feldman’s ambitious social and political activity was rewarded with numerous awards: Order of Merit of third, second and first classes, Order of Prince Yaroslav the Wise of the V degree, the award of the Primate of the Ukrainian Orthodox Church ‘For outstanding services to the Orthodox Church’, Golden Order of St. Nicholas “For augmenting the good in the world’, ‘Christmas 2000’, the Reverend Nestor the Chronicler, the Order of St. Vladimir I degree, a special medal of the French Republic ‘For the dedication to the protection of human rights’, as well as a number of awards and memorials from the United States, Israel and European countries.In November 2008, for a significant personal contribution to the development of inter-religious dialogue, Patriarch of Jerusalem Theophilos III awarded O.Feldman the Order of Svyatogorbskii brotherhood.

In 2013 Oleksandr Feldman was awarded the title of ‘Honorary Citizen of Kharkiv city’.