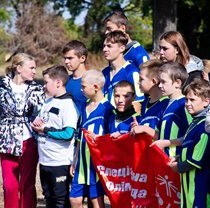 This is the third time such competitions take place on the basis of the Social and Humanitarian Multi-Complex with the support of the International Charitable Foundation “Oleksandr Feldman Foundation” within the 1,000 Teams Tournament project.

“Best players, winners of regional tournament, will go to Kyiv on National Competitions to compete for the right to represent our country at the World Special Olympic Games. Football, basketball, athletics and other sports competitions among children with mental disorders have been held throughout the world for almost fifty years. Since the early 2000s, Ukraine takes part in them, showing high results – our athletes repeatedly won medals and cups, -the regional coordinator of the Special Olympic Games of Ukraine in Kharkiv oblast Ihor Vyshnia told. – But still, the main task of the Special Olympic Games is not sports results, but social changes: to combat negative stereotypes of society towards people with mental disorders, help them to socialize, improve the quality of life. In the West, this direction is actively supported by the State and financed at the level of Government programmes. We have this movement developed by the efforts of enthusiasts primarily by support of philanthropists and charitable organizations, such as Feldman Ecopark.”

It should be noted that the first World Special Olympic Games were organized in 1968 by the American teacher of physical education Anna Bürke funded Kennedy Foundation. In December of the same year, the organization “Special Olympic Games” was created, which received the status of charitable. More than three million people from 180 countries of the world participated in the special Olympic movement. There is no goal to identify the strongest and to record sports records at competitions. Special Olympiads are held exclusively for the purpose of adaptation of people with intellectual disorders.

It should be reminded that work with people with special needs is one of the main directions of Feldman Ecopark since the moment of its establishment. Here, the Centre for Psychosocial Rehabilitation works, inclusive lessons are given in Children’s Ecology and Nature Study Academy of Feldman Ecopark, and in the summer special sessions are organized in the Children’s health-improving and educational camp.

It should be also reminded that 1,000 Teams Tournament is the project of the International Charitable Foundation “Oleksandr Feldman Foundation”, aimed at popularization of children’s sports and healthy lifestyle.