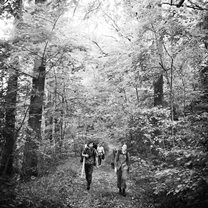 The specialists of Bat Rehabilitation Center of Feldman Ecopark Olena Prylutska and Vitalii Hukov, as well as young naturalists Rita Moiseienko and Iliia Nekrutov have been motitoring bats in the National Natural Park Homilshanski Lisy (Kharkiv oblast) for two weeks. The goal of such monitoring is to find out what species of bats live in a certain territory.

The head of the Center Anton Vlashchenko and Olena Prylutska started studying bats in this national park in 2008, then they found 11 species of bats (from 14 known in this region). Here they live in hollows of trees, give birth to cubs and eat insects all summer.
“It’s not that easy to catch a bat at night: special mist nets are used in such cases. Specialists sit near them for hours from dusk till dawn. As soon as small animal got caught in a net, it has been carefully got out and put in a sack. In the morning, each individual is sized up, ringed and returned to nature with nightfall” — told in the Bat Rehabilitation Center of Feldman Ecopark.
This year, the students of Karazin Kharkiv National University, who traditionally had practical training at the Biological Research Station and two students of Taras Shevchenko National University of Kyiv joined the specialists of the Center.
The Center conducts such monitoring every three years, they help to learn more details of bat life, knowing that every species is listed in Ukrainian Red Book.

It should be reminded that the Bat Rehabilitation Center of Feldman Ecopark is a unique animal protection organization not only for Ukraine, but also for entire Eastern Europe. Since its establishment, it rescued more than 12,000 of these animals.