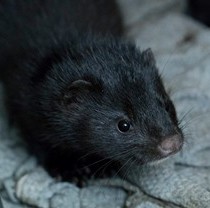 Recently, the Centre for Wild, Exotic and Domestic Animals Rescue “Feldman Ecopark Good Home” gave home to five minks and four martens rescued by animal protection activists. Without their intervention, the unenviable fate to become expensive fur coat or other status accessory awaited these fluffy animals. Fortunately, animals are out of danger now – minks are currently staying in quarantine under supervision of veterinarians, while martens settled in separate expository enclosure after short rehabilitation.

“Minks and martens are relatives, unfortunately, possessing valuable fur. Because of it, these small predators of Mustelidae family have trade value from the earliest of times. They have been massively killed on hunting. Therefore, for example, the European mink was hunted to the verge of extinction. Now minks and martens are bred on numerous fur farms for the only purpose: to kill and strip the fur off. In recent years, more and more people have realized inhumanity of such activity and there are increasing number of volunteers redeeming animals from death camps for transmittal to nature protection organizations — told in “Feldman Ecopark Good Home”. – Thus, raccoon dogs, polecats, ferrets, foxes and polar foxes found home in our Multi-Complex. A few weeks ago, four martens (three forest and a stone one) and five minks were brought to Ecopark. Caring people made a good deed – we thank them for these rescued lives!”

According to specialists of Feldman Ecopark, animals feel well. They eat chicken meat, veal, an offal, quail eggs and cottage cheese with appetite. We don’t plan to return them in nature – small animals got used to person and won’t be able to survive independently in the wild any more.

“Another matter is posterity of martens, which, we hope, will appear and sooner, with the proper upbringing, can be released to the nature. As for minks, these individuals belong to the American species, invasive for our territory, and consequently can’t be introduced. Unlike European mink, whose reintroduction we plan to develop in the near future” — the head of the science and monitoring department of Feldman Ecopark Andrii Hapchenko noted.

It should be reminded that Feldman Ecopark together with the World Open Foundation for Animal Rehabilitation and Reintroduction (WOFARR) actively participates in preservation and return to the natural habitat of different types of Ukrainian fauna. One of the perspective directions of this work is participation in the project on preservation of the European mink by the European Association of Zoos and Aquaria (EAZA). At this stage, the preparation of keeping conditions of reserve population of these Red Book animals and negotiations with partners are in process.