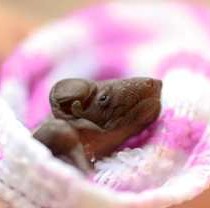 Recently, five cubs of common noctule were born in the Bat Rehabilitation Center of Feldman Ecopark. Mothers feed kids with milk under supervision of the veterinarian and soon will teach them to fly in the special enclosure of Bat Collider, built this spring.

“Bats very seldom breed in captivity, but in our Center it happens regularly: last year two cubs of common noctule were born, this year we got addition of five individuals – four males and a female. Their mothers got on rehabilitation already pregnant. Cheiropterans have an interesting feature — delayed fertilization. Males and females copulate in the fall, then they have a winter dream, and right after awakening pregnancy is started — the Rehabilitation Centre’s deputy head, Olena Prylutska told. – As soon as bats learn to fly and to hunt insects, we will release them in the forest. In summer, common noctules live in hollows of trees. For now, they will train in our Bat Collider, which was created for these purposes, as well.”

It should be reminded that in April of this year the Bat Rehabilitation Center of Feldman Ecopark to the experts and public the new enclosure with bats (Bat Collider). It is located in a forest zone and has ring-shaped form. The laboratory and a shelter for those bats that cannot be returned to the natural habitat because of injuries or for other reasons will work on the basis of Bat Collider.

It should be reminded that the Bat Rehabilitation Center of Feldman Ecopark is a unique animal protection organization not only for Ukraine, but also for entire Eastern Europe. Since its establishment, it rescued more than 12,000 bats, all species of which are in Ukrainian Red Book.