Exhibition “Germans in Ukraine: history and culture” in AVEC Gallery 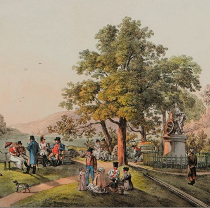 The exhibition “Germans in Ukraine: history and culture” will open on October 12 (at 3 p.m.) in the AVEC Gallery. It is carried out within the week of Germany in Ukraine and is a start of events of the Association of National and Cultural Unions of Ukraine together with the International Charitable Foundation “Oleksandr Feldman Foundation” directed to acquaintance with history of people living in our country.

The exposition consists of 24 stands illustrated with drawings, maps, photos and documents. Each of them opens a certain page of life of Germans in Ukraine, since X century and finishing in 1939th year. The author of the concept of an exhibition and descriptions is Dr. Alfred Eisfeld, the German historian, the author of numerous scientific works, the expert in history and culture of Germans in the Russian Empire, the USSR and the former Soviet Union.

“The exhibition in general gives unique and universal material for studying of a role of the German community in the history of Ukraine, its powerful contribution to the history, culture, art, architecture, economy and other spheres of life” — the organizers claim.

Besides, the works of well-known German graphic artist from Nuremberg Johann Adam Klein, at the end of XIX century donated the Kharkiv Art Museum by the Ukrainian collector Arkadii Alferov are of great interest to subtle connoisseurs. Some of them are exhibited in the AVEC Gallery.

The Consul general of Germany in Ukraine Wolfgang Messinger, the representatives of Council of Germans of Ukraine, the Kharkiv Regional Society of Germans “Wiedergeburt” and local governments plan to take part in the opening of an exhibition.