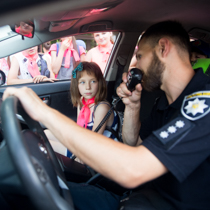 The Social and Humanitarian Multi-Complex began cooperation with the Patrol Police Department in Kharkiv oblast, whose officers conduct interesting and informative lessons for pupils of the summer camp.

According to Mykyta Synegybskii, the inspector of Outreach Division of the Patrol Police Department in Kharkiv oblast, such work is being conducted in summer camps for children to learn more about the activity of patrol police and about their own rights and standards of conduct as well.

“In general, our goal is to make a stay of children on city streets safer. Today, we visited the summer camp Feldman Ecopark to find time for children and to acquaint them with safety fundamentals, traffic regulations and street safety instructions. Besides, we told about ways of communication with police officers, in what cases police officer can address them, how to behave with strangers, who can pose a potential threat for the child and whom to turn to for assistance, if you got lost. I think that after our communication children became a little closer to police”, – Mykyta Synegybskii noted. Moreover, the story by patrol police officers about particular features of service was interesting, because it included acquaintance to the patrol car. Everyone had an opportunity to get into the car, to feel himself a police officer or one on an important mission. Lessons conducted by patrol police officers in the summer camp Feldman Ecopark will regularly take place once a week, on Tuesdays.

It should be noted that it is not the first joint project of ICF “Oleksandr Feldman Foundation” and Feldman Ecopark with the Main Administration of the National police in Kharkiv oblast. In particular, good results were shown by “Let’s Take Children Away from Streets” programme for children from troubled families and “difficult” teenagers: according to police, none of the participants of the project comes into contact with the law any more.