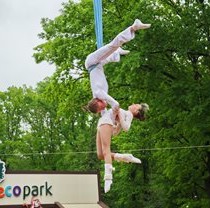 Victory Day over Nazism in World War II was celebrated in Feldman Ecopark on May 9. Despite the rainy weather, thousands of Kharkiv and Kharkiv region residents came to the Social and Humanitarian Multi-Complex. A rich and diverse festive programme was prepared for the visitors, which was interesting for both children and adults: master classes, pavement drawing competition, intellectual quizzes, thematic performances by creative teams and the traditional Path of Remembrance with the names and photos of the war veterans who were born in Kharkiv.

“As usual, on this day, we think of the names of our compatriots who defended the world from the Brown Plague in the middle of the previous century. Our debt, each and every year, is to pass on the baton of memory to our children and grand-children. The memory about the feats of our ancestors is an uninterrupted connection of generations,” the festivities’ organizers tell.

The central events at the festivities, which gathered the biggest audience, were the performances by the children and youth studio of circus art Old Circus and the professional children and youth special theatre Children of the Future. The music of war times sounded in Feldman Ecopark during the day, and photo zones were open making it possible to plunge into the atmosphere of those times.