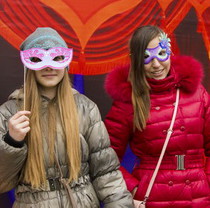 During the weekend of March 26-27, the Feldman Ecopark celebrated the World Theatre Day. The artists of the Puppet Theatre made a spectacular show for the visitors. The original tricks from the Feline agility new program were prepared by the young actors and actresses of the Theatre of Children and Animals of the Feldman Ecopark: under the watchful eye, the felines demonstrated not only the ability to follow the orders of young naturalists, but also to get over the obstacle course synchronously.

After the end of the shows, the guests were able to look behind the scenes, trying themselves on the other side of the stage as costumiers and artists. Those who like needlework were able to create theatrical accessories. The open master class in creating carnival glasses and finger toys was carried out for them. As for those who dreamed about the stage for a long time, the organizers provided them with the opportunity to become participants of performances. Children and adults tried glove puppets on and demonstrated author’s shows. The celebration ended with Repka comedy.

The weekend holiday program also included the amazing parade of animals, the bright concert of graceful stilt-walkers, and the original photo shoots.