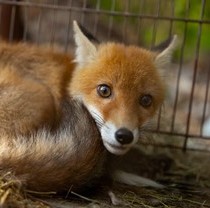 Tow young foxes undergo rehabilitation in the Centre for Wild, Exotic and Domestic Animals Rescue “Feldman Ecopark Good Home.” The animals were brought there in the end of summer. One of them was rescued from the training hunting center, the second one (very tame) was found in the street, where the animal was left by negligent owners.

“Both foxes were in poor condition. The kid used for training of hunting dogs had a strong exhaustion and severe stress. The other one, who appeared to be unneeded to people who tamed it, was injured in the streets and was starving. Kind people saved them from death, while we provided the necessary veterinarian assistance and arrange a proper care,” the head of Feldman Ecopark Good Home Iryna Podvoiska told. “These fox stories are different, but, at the same time, very similar. They are about people – about their cruelty and compassion.”

According to Iryna Podvoiska, a lot of time is still needed for the rescued animals to recover completely. They are unlikely to return to the natural habitat, and will probably stay in Feldman Ecopark.

It should be reminded that a little fox with a broken leg and two little foxes rescued by Kharkiv students are currently undergo rehabilitation at the Centre for Wild, Exotic and Domestic Animals Rescue “Feldman Ecopark Good Home” as well.