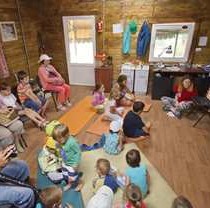 Today, July 4, Feldman Ecopark Centre for Psychosocial Rehabilitation in cooperation with social services and Future and Hope Foundation had a meeting with the families in difficult life conditions. The launch of the project is devoted to the Day of Ukrainian Family, which is celebrated on July 8.

Children and their parents had an excursion to the Social and Humanitarian Multi-Complex, found out more about its animal collection and Horse Complex, about the work of the Bat Rehabilitation Center, and had a walk along the barefooted path. In addition, the lessons with the participation of psychotherapist were given to the parents.

“The main massage we wanted to give to these families, who encountered difficulties. It is the strengthening of family values by way of formation of leisure time and perception of environment. By acquainting them with different species of animal, with their peculiarities, we not only broaden their outlook, but also put the fundamentals of tolerant attitude to the animal world, as well as to each other and to other people,” the head of the psychological service of the Centre for Psychosocial Rehabilitation Tetiana Aliieva. “We acquainted our visitors with the animal-assisted therapy, equine-assisted therapy, canis-therapy. An interesting peculiarity of the meeting was the acquaintance with the work aimed at the rescue of bats. Their participants were able to assess the work of the Bat Rehabilitation Center. Perhaps, in the future, they will express the wish to become its volunteers.”

According to the head of the medical service of the Centre for Psychosocial Rehabilitation Inna Vashkite, the event was attended by the families, who encountered certain difficulties, many of them have many children. Therefore, the specialists of the Centre decided to speak to them in question-answer format about the interaction with children, about overcoming of difficulties and any other issues that concern them, and to render psychological assistance to those who need it.

They tell in Feldman Ecopark Centre for Psychosocial Rehabilitation that the families from all over Ukraine may take part in such one-day meetings all year round.