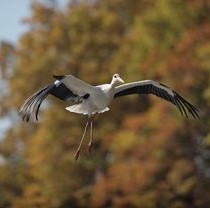 New feathery residents (two storks and two swans) settled at the Swan Lake Feldman Ecopark. These birds were rescued by animal protect activists this autumn and were rehabilitated in the Centre for Wild, Exotic and Domestic Animals Rescue “Feldman Ecopark Good Home.” Now they will live next to their relatives in conditions as close as possible to their natural habitat.

“Each of them has own sad story but with a happy end. One of the storks was pulled out of a boiler pipe in Kharkiv suburbs – bird’s feathers are still in soot, but that’s before spring shedding. The other, recently fledged, was brought from Zolochiv, where his whole family was shot and we had to teach the bird to fly instead of his parents, – the head of the Birds department in Feldman Ecopark Volodymyr Perekhodovych told. – Almost the same with swans. The one, who with an amputated wing was recently brought from Kupiansk, has already recovered after operation. Therefore, we decided to release a bird on the lake so that he had time to rejoice in the sunny autumn days. The second white handsome was almost eaten by homeless people in Pisochyn. We barely managed to poach the bird from “gourmets.” Our little brothers endure many ills from human, but fortunately the world is arranged in such a way that there are people who do not pass by someone else’s grief, rescue animals and care for them.”

According to Volodymyr Perekhodovych, our animal keepers will take care of newcomers, help to adapt in a new place and to join the feather collective.
“All our birds get plenty of fish and grains, especially in winter, when it is not possible to procure food, so conflicts over food are excluded. In case of bad weather and cold, there are warm houses. In severe frost, we cut special holes for waterfowl. Birds are protected from foxes and other potential predators by coastal protective net and service dogs. In general, the winter conditions on the Swan Lake are quite safe and comfortable,” he told.

It should be reminded that the Swan Lake is a unique nature complex for water birds, which exists in the territory of Feldman Ecopark for three years. Here, on one of the water bodies of the Three Lakes, more than a hundred of birds – swans, pelicans, storks and ducks – live in natural conditions, but under the care of animal keepers. The part of them was rescued and undergoes rehabilitation thanks to the Centre for Wild, Exotic and Domestic Animals Rescue “Feldman Ecopark Good Home.”