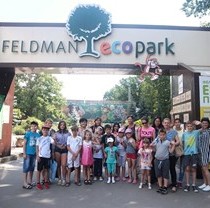 Social and Humanitarian Multi-Complex Feldman Ecopark was one of the first in Ukraine to start in 2014 the implementation of the rehabilitation programme for the victims of the War in Donbas (IDPs from the conflict zone in the East of Ukraine, ATO servicemen and the members of their families, children living in the front-line territory), and has already provided assistance to nearly 10,000 persons. From the very beginning, this programme attracted the experts of the National League of Psychotherapy, Psychosomatics and Medical Psychology and Kharkiv Medical Academy of Post-graduate Education under the Ministry of Health of Ukraine, who established the Centre for Psychosocial Rehabilitation in Feldman Ecopark a year earlier. The foundation for their work was the use of drug-free methods – the animal-assisted therapy, landscape therapy, art therapy and so on, which were united by Kharkiv scientists into a synthetic method called ‘eco-therapy.’

“Eco-therapy is a brand new concept in medicine. It gives priority to the complex use of natural factors and cultural environments, as well as creativity for the creation of therapeutic climate, which favourably influences a patient,” the head of the Centre for Psychosocial Rehabilitation of Feldman Ecopark, Doctor of Medicine, professor, Ukraine’s Honoured Scientist and Engineer Borys Mykhailov. “As an additional and supportive method, eco-therapy demonstrated positive results in the work with different categories of people, who were affected by the War in Donbas, especially children, who were deprived of peaceful childhood.”

It should be noted that Feldman Ecopark Centre for Psychosocial Rehabilitation implements several targeted programmes for the fourth year running, and each of them differs with own specificity. Thus, the programme “Let’s Restore the Life Together” is aimed at the psychological rehabilitation of the family members of ATO (JFO) servicemen, while “Ukraine in One Rhythm” is aimed at the socialization of IDPs and arranges the tours to happy childhood for the children living in front-line territories. The programmes “The War in the Eyes of Children” and “Let’s Take Children away from Streets” are aimed at psychological support of children, who were affected by the War in Donbas to a greater or lesser degree, and at the deviant bahaviour among teenagers.

“The horrors of war experienced by people will, unfortunately, remain in their hearts forever. It is very difficult to adapt to peaceful life without the professional assistance of specialists after hiding from bullets in basements. It is especially difficult for children. And we apply maximum efforts to return them to common life. I will never be tired to repeat: children must have a happy childhood and we, adults, are responsible for this,” the founder of the Social and Humanitarian Multi-Complex, Ukrainian MP Alexander Feldman notes.

It should be reminded that Social and Humanitarian Multi-Complex Feldman Ecopark exists in Kharkiv oblast since 2011. It is a favourite place for the rest of Kharkiv residents and guests of the city, as well as one of the top sights in Eastern Ukraine. More than 7.5 million people from dozens of countries around the world have already visited it, and it is an absolute record among the similar Ukrainian parks. Feldman Ecopark is a charitable project of the International Charitable Foundation “Alexander Feldman Foundation” and its partners, and all of the events and programmes are free of charge for their participants. Main fields of activities of Feldman Ecopark cover psychological rehabilitation of children and adults, global animal and environment protection projects, and the issues of flora and fauna preservation.