Feldman Ecopark Released More Than 100 Pheasants Back To Nature 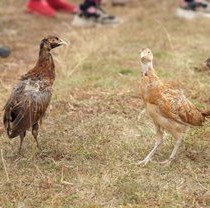 Representatives of the Regional Landscape Park Feldman Ecopark released more than a hundred pheasants back to nature near the village of Mali Prokhody, Dergachi district, Kharkiv region.

“Recently, the number of pheasants in the Dergachi district has significantly decreased, so we decided to replenish the population,” told in the Regional Landscape Park. “The release of pheasants, as well as a number of other bird species back to nature has already become a good tradition for us and part of a great work directed at restoration of populations of different Ukrainian animal species.”

Specialists note that Dergachi district of the Kharkiv region is appropriate for pheasants. Here is a good feed base for them as well as all conditions to live and give addition. Young birds grew up in Ecopark; some of them were rescued by the Centre for Wild, Exotic and Domestic Animals Rescue “Feldman Ecopark Good Home”.

It should be reminded that releases of pheasants back to nature have been conducted in Feldman Ecopark over the past few years. In previous years, several thousand of these noble birds were released in the territory of Ecopark so that they could bring addition and not only live in Feldman Ecopark’s forest zone, but also begin to develop neighbouring territories.