Rescue team of Feldman Ecopark got under fire again 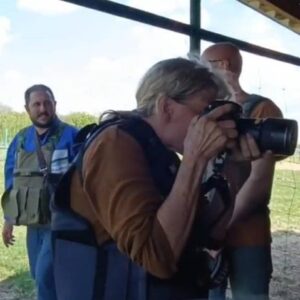 Previously, we did not show such videos much, since we did not want to escalate. But after a dirty information campaign accusing us of not wanting to take the animals out and not letting in someone who could come and pick them up was launched, we want to demonstrate how difficult it is and under what conditions our rescue team has been working for more than two months. These guys, however, have already taken out almost all of the 5,000 animals.
It is not only the life of animals, but also the lives of people at stake. And when organizing trips to the territory of Feldman Ecopark, our first goal is to save the lives and health of their participants. Very often our rescue operations have to be canceled due to shelling. This time, thank God, no one was hurt. We were accompanied by journalists – the operator of the TV channel Inter Alexander Yanovsky and ZUMA Press photographer, the winner of four Pulitzer Prizes, Carol Guzy. We are grateful to them for their courage, and we have no doubt that they will show the truth about the situation in the Ecopark. And the distributors of fakes and lies will be responsible for defamation in court.