O. Feldman about Future Parliamentary Elections: This is not Karabas Barabas Theatre 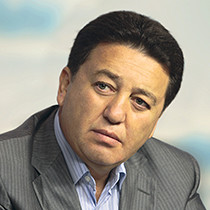 The Ukrainian MP Oleksandr Feldman commented on the forthcoming parliamentary elections in the majority constituency № 174 (Kholodnohirskyi and Novobavarskyi districts) where he was five times elected a Deputy of the Verkhovna Rada.

“I’m for fair competition. The competition of real acts and projects made independently, but not for budgetary funds. Courtyard meetings – fine, fictional plots on one of local channels – what a great idea! Criticizing me in the text written in the known office hardly requires sharp knowledge or courage. Certainly, not everyone likes what I’m doing. I’m always ready to constructive criticism and honest direct dialogue. I never sheltered myself behind others and I won’t do this” — he emphasized.

Commenting on remark of a journalist ed. note “You won’t be admitted on elections to the Verkhovna Rada. Another candidate, actively lobbied by local officials and the mayor is already “appointed” to your district”, the politician noted that local authorities have long been active in advancing of their protégé on the district and it is a simple drain on the budget for convenient and “tame” candidate.

“Elections are not Karabas Barabas Theatre. These “hold offs” don’t work on me. Concerning “appointment” of other candidate, I will tell the following: what you call lobbyism consists in simple drain on the budgetary funds for convenient and tame candidate. It could be any one on his place, even a telegraph pole. It is enough to take a picture of it near the mayor and seems it’s done, success is assured. But the reality is quite different” — Oleksandr Feldman emphasized.
It should be noted that at the parliamentary elections of 2014, Mr. Feldman gathered 64.94% of votes in the majority constituency № 174 that became record level of support of citizens for Kharkiv and Oblast.
Besides, it should be reminded that only in 2018 thanks to Oleksandr Feldman’s appeals, UAH 10 mln were allocated for capital repairs of schools, kindergartens and out-of-school institutions of the Kholodnohirskyi and Novobavarskyi districts of Kharkiv, while in 2017 under the assistance of Oleksandr Feldman, UAH 25 mln of subventions were allocated from the state budget for the education institutions and cultural objects of these districts.